The computer did not function? Or are you connecting your computer parts now? Today, we’ll learn what the DRAM light on a motherboard really denotes and how you can fix it? A DRAM light will not just switch on itself, so the issue is almost certainly something else.

Please be conscious that it’s completely at your own risk. We take no accountability if anything happens to your computer parts throughout the procedures. We’ve succeeded, but it can happen otherwise.

What Does The Motherboard Light Mean?

A few motherboards don’t have lights because of the model and manufacturer differences. Other models even have complete displays for fast diagnostics, like MSI’s EZ Debug LED feature. During starting, such lights show the status of important computer parts, like the GPU, CPU, RAM, and hard drive.

A blinking or static light on the motherboard doesn’t necessarily denote that you have a problem. However, if you are having an issue with the computer, it can assist you in identifying the issue. The lights can be mainly helpful in diagnosing a problem if the PC would not switch on at all.

What Does The Orange Light On Motherboard Really Mean?

The orange light is on for some reason. Orange denotes something is wrong with your hardware device or motherboard. 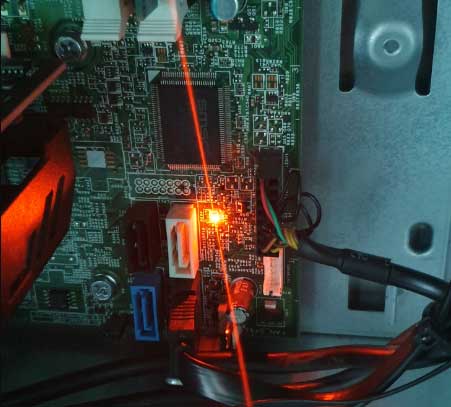 There is no operating system malfunction or software bug here. Here are some reasons why the orange light is on.

Having A Low Power Supply:

The Power Supply Unit powers different hardware and motherboards. If the system requires a 650W and 700W PSU, the motherboard orange light might specify this.

If you buy a Power Supply Unit that’s not eighty plus bronze or higher, you might not get stable power to the motherboard and its parts.

The RAM you’re making use of might not be compatible with the motherboard. It may be why the orange light emerges at the bottom right of the PC.

May not insert the RAM stick properly. You can just insert it one way. The RAM slot ought to adjust to the small gap on a stick.

Check all the fans connected to your motherboard inside the CPU case. A motherboard might light up orange if any fans are not functioning. The fan might not spin if dirt has accumulated on the computer. Make sure that all the parts are cleaned frequently.

How Can You Fix The Orange Light On Your Motherboard?

Taking Out And Reinstalling Your RAM Stick:

Taking out and resetting the RAM might fix the orange light issue on the motherboard. The system might not identify the RAM properly if you haven’t inserted it correctly. You can make use of a blower for cleaning the slot or rubbing alcohol for cleaning your RAM.

Before installing your RAM stick into its RAM slot, make sure it’s scorched.

The orange light on the motherboard might have a button close to it. When you hit the button briefly, the PC will frequently resolve itself. You might not adjust your RAM settings on a few motherboards to your RAM. It’ll reconfigure the RAM based on the settings of your motherboard.

If the orange light on the Graphics Processor Unit (GPU) is lit, you can see if the cooling fan is working. If not, you may not have sufficient power supplied to the motherboard by the power supply. You require a PSU that can offer adequate power for your motherboard to resolve this issue.

It’s simple to decide the amount of power the desktop PC requires. A few websites, comprising Newegg and Coolermaster, offer a section on their website that helps you in computing the needed power for the desktop PC.

Ensuring That The BIOS (Basic Input/Output System) Is Updated:

BIOSs are PC programs that exist in the ROM of the PC. The PC’s BIOS is utilized for starting the OS and communicating with different devices connected to your motherboard. On the I/O panel of the majority of motherboards, you will locate an icon known as the flash BIOS button that allows you to update the BIOS.

You do not require RAM or CPU to update the BIOS with this button. A flash drive is all you require for doing so. Utilizing a flash drive for updating the BIOS, you can follow the below steps:

After the BIOS update is finished, you can connect the components again to check if the issue is fixed or not.

When the PC is unplugged, the BIOS still has to be operational. The CMOS battery powers your BIOS. Follow the below steps for resetting the CMOS:

Check if the orange light is gone by starting the PC.

What Does The Red Light On The Motherboard Mean?

If the motherboard has the red light, that denotes either your internal hardware isn’t plugged in properly or is not functioning.

The red light always emerges when your PC is switched on, but it doesn’t start, enter the BIOS, or display anything on your monitor. There are different types of issues relying on your motherboard and the red light’s location. A few motherboards offer a label explaining what is actually wrong. 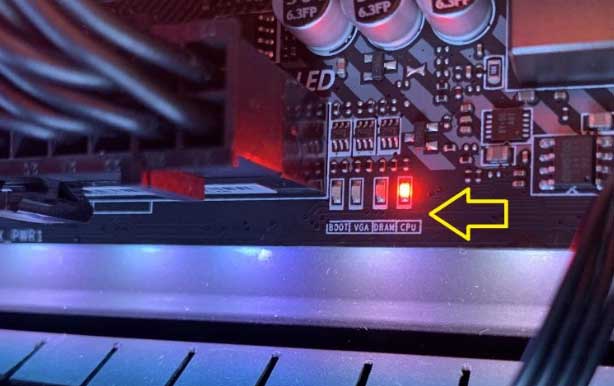 A few older motherboards may have only one red LED that is unlabeled, making it hard to resolve what’s happening. Refer to your user manual that comes with the motherboard if you cannot tell what is wrong (something isn’t plugged in properly, etc.).

Comprehending The Red Lights On The Motherboard:

It can denote that your motherboard doesn’t recognize your CPU if the red light emerges beside this indicator. A pin might have bent or might not plug your CPU properly. There might also be a problem with your CPU fan. A dead CMOS battery can also cause this red light.

The red light’s presence beside the DRAM indicator signifies that the RAM module hasn’t been seated properly. It is probably an issue if you see that the side clamps of your RAM stick aren’t firmly fastened.

The graphics card hasn’t been adequately seated or detected when the red light emerges close to the GPU or VGA indicator.

A red light might emerge beside the boot indicator if something’s not right with your hard drive, which is your boot device. It’s precisely your hard drive that has the OS.

How Can You Resolve The Red DRAM Light Issues On Your Motherboard?

Utilizing the below steps, any board that doesn’t have the labeled LED indicator can be performed.

What Does A Yellow Light On A Motherboard Mean?

It’s suggested to read the motherboard manual, which you can get on the manufacturer’s website if you lose yours.

How Can You Resolve The Yellow Light Issue On Your Motherboard?

I suggest clearing your BIOS and CMOS, or you can take out the battery from your motherboard, cut off the power from the PC, hold down the power button for about thirty seconds so that your motherboard is discharged and then try over.

For better comprehension, the yellow, orange, and red DRAM lights on your motherboard can be triggered by a broad variety of problems, which we have talked about thoroughly in the above guide. You’ll likely locate a fix to every of the listed issues.

DRAM Light On And No Display:

You ought to first try to plug your GPU cord into your motherboard. Then, certainly, if you have your CPU with the Intel HD graphics interface, you’ll know if there’s an issue with your GPU. If you hear a beeping sound that denotes the computer is trying to inform you about something. If there’s no beeping sound, perhaps the motherboard does not have a speaker. You can Google all the beep codes.

What Does DRAM Light Denote On The Motherboard?

If the DRAM light on the motherboard is on, you’ve got a memory problem. Frequently the issues are triggered by RAM that’s incompatible with your motherboard, damaged RAM, or a defective processor (rare).

How To Resolve A DRAM Light On The Motherboard?

Take out the BIOS/CMOS battery, disconnect all the power from your Power Supply Unit, and wait five minutes. Thus, you’ll reset the CMOS/BIOS on your motherboard set.

What Does DRAM Light Denote?

After powering on, the DRAM light stays on (showing no memory or faulty memory): see your memory installation. Please reinstall it if it is not completely installed.

Can A DRAM Light Be Caused By CPU?

Because your memory controller is in the CPU, a damaged CPU can certainly turn the DRAM light on. Still, unless one of such conditions above was met, or you purchased is used and aren’t certain what kind of abuse it might have faced, or you’re that type of individual, it is pretty unlikely it is just a damaged CPU.

As with any hardware breakdown, DRAM issues can appear spontaneously. A damaged DRAM module, or another part of your system, for example, the out-of-spec power supply, can trigger DRAM issues at a rate that’s quite obvious, affecting the system performance.

Why Do Motherboards Still Have PS2?

Can a Motherboard Bottleneck PC Components? 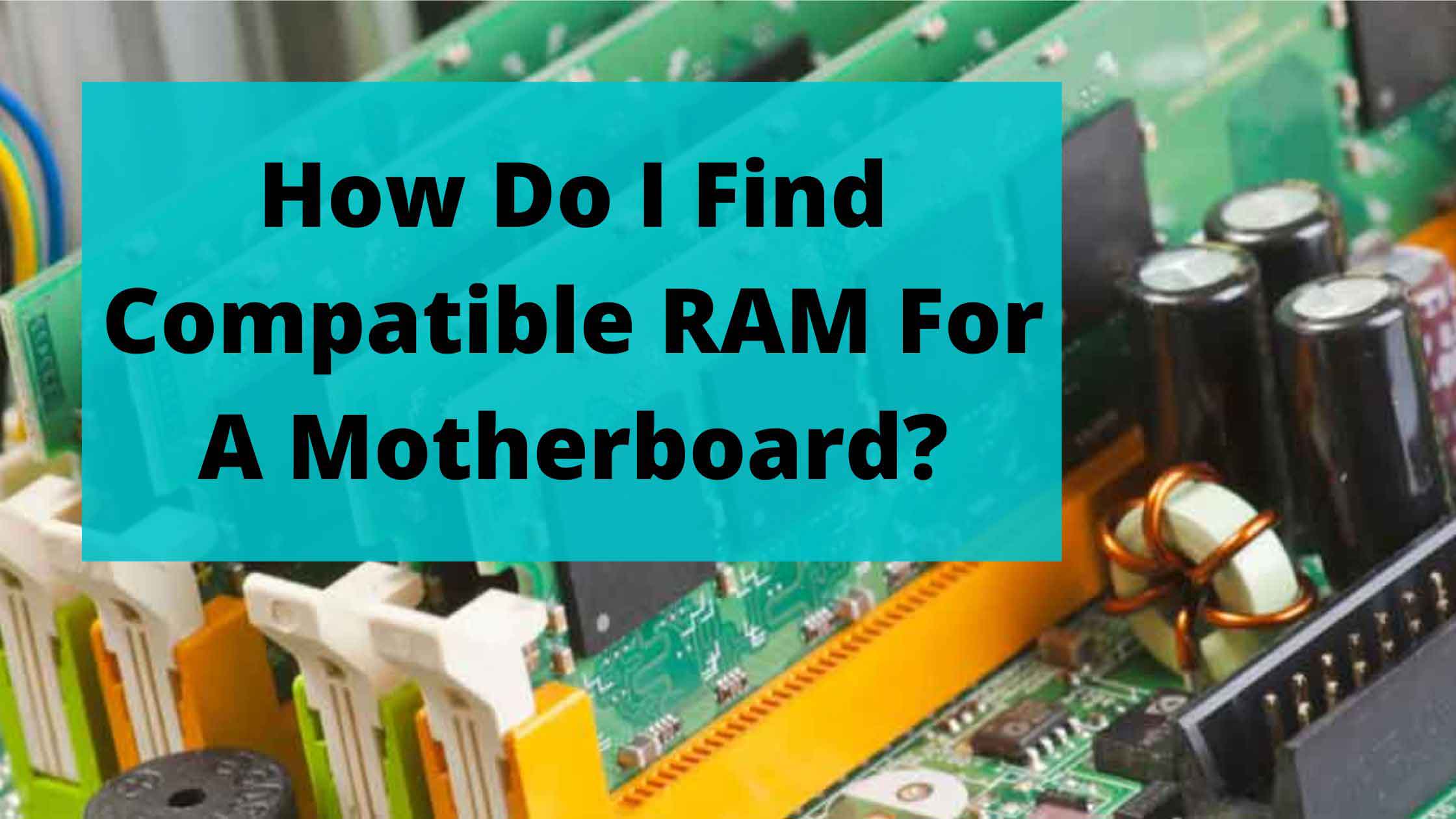